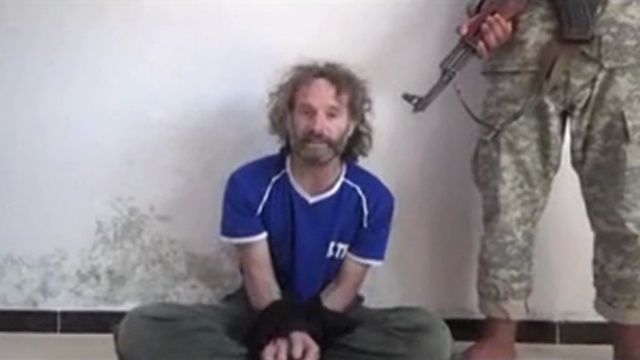 45-year old United States journalist, Peter Theo Curtis who was held hostage for 22 months by a Syrian extremist group, al-Nusra Front returned to the US on Tuesday, two days after he was released.

He arrives at the Newark Liberty International Airport on Tuesday from Tel Aviv according to his family’s spokeswoman, Betsy Sullivan. Curtis reunited with his mother, Nancy Curtis in the evening at the Boston Logan International Airport. The journalist through a statement said he is indebted to U.S officials who worked his release

“I have been so touched and moved, beyond all words, by the people who have come up to me today — strangers on the airplane, the flight attendants, and most of all my family — to say welcome home”

You will recall that just last week, another journalist – James Foley who was also kidnapped in 2012 while he covered the Syrian uprising was beheaded by some Islamic extremists who claimed to be retaliating the air strikes US launched on areas where Islamic states are located in Northern Iraq.

The mother of the released journalist said she was so relieved about her son’s release but commiserated with the family of the slain journalist:

“But this is a sober occasion because of the events of the past week” . “My heart goes out to the other families who are suffering.”