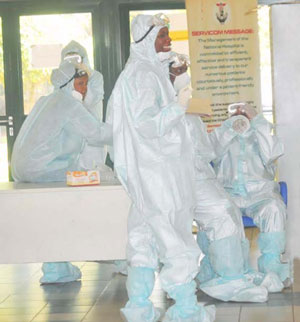 Two West African nations and a medical charity fighting the world’s worst Ebola epidemic chided the World Health Organisation (WHO) on Friday for its slow response, saying more action was needed to save victims threatened by the disease and hunger.

With the death toll over 1,000 and still climbing, the U.N. health agency is facing questions over whether it moved quickly enough to declare the months-old outbreak a “public health emergency of international concern”, which it did on Aug 8.

Medical charity MSF (Doctors Without Borders), which has been one of the most active groups in fighting the outbreak, said its spread had created a “wartime” situation in the worst-affected states of Sierra Leone, Liberia and Guinea. Nigeria is also facing a smaller separate outbreak.

“We need a more robust response to the nature of the disease and the way it is affecting us,” Koroma said in Freetown, adding he had delivered this message to the WHO, which is coordinating international efforts to try to control the outbreak.

The WHO said on Friday the death toll from this epidemic, first declared in Guinea in March, had risen to 1,145, as 76 new deaths were reported in the two days to Aug. 13 in the four nations affected so far.

“If our people are dying, the response should be an extraordinary response because it is an extraordinary situation,” Koroma told a news conference, saying his country needed more Ebola treatment centres and medics to staff them.

“Time is of the essence,” he added, saying he had seen the world respond to major humanitarian crises, such as the 2010 earthquake in Haiti, and West Africa needed similar help