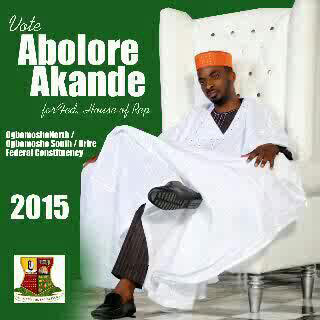 It seems the 2015 election will be an interesting year for entertainers in Nigeria, from Kate Henshaw who seeks a parliamentary position in Cross River State to Desmond Elliot and now Abolore Akande, known as 9Ice who has surfaced to declare to head to the green chambers in Abuja.

The Gongo Aso crooner,who has somewhat disappeared from the music scene for a while has resurfaced, only this time as a political aspirant, of a yet-to-be declared political party.

The singer officially made public his intent to contest for the House of Representatives seat for Ogbomosho North/South/Orire Federal Constituency of Oyo State in the February general election of 2015.

9Ice is the latest entertainer to declare intent to run for elective office come 2015 general elections. Only last week, ace comedian, Julius Agwu rolled out his posters, declaring his ambition to be the next governor of rivers State.

“You Have Bruised The Head Of Tyranny” Tinubu Congratulates Governor Aregbesola