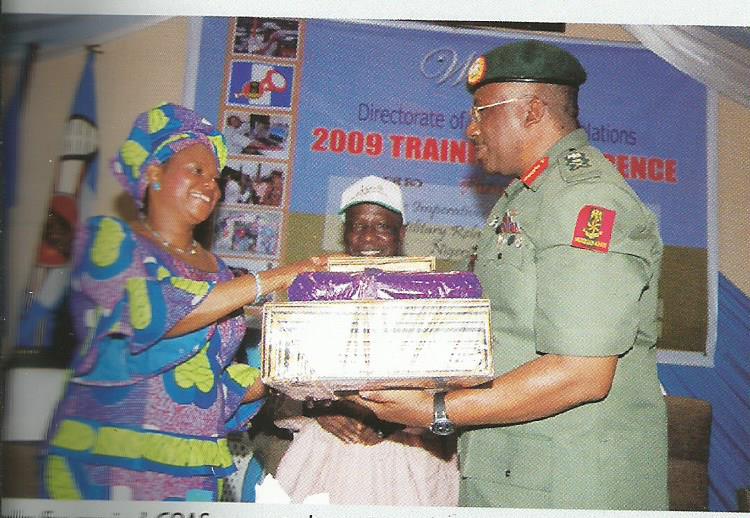 At every turn in history, iconic men and women; those exceptional people with unprecedented breadth of service to humanity, the icons whose trajectory stand them apart from the packs, appear like the comet to beautify our world. Great achievers and products of inspiration, such rare breeds of men and women do not appear from the abyss of frivolity, vainglory or wishful thinking. Inspiration and courage gave birth to them while patriotism and passion for hard work nurtured them into limelight and ingrained them into our hearts.

Indeed, those pantheons do not come often. Only few nations are blessed with them and Nigeria is privileged to be one. In this land it was, where an accomplished scholar, moral colossus, ethical titan, die-hard nationalist, pacifist and dogged fighter for a just and decent society by name Dora Nkem Akunyili walked an amazon; a Professor of repute.

I speak of my sister, Professor Dora Akunyili with fond memories and familiarity because I knew her in person. Although I had grown to so admire this extra-ordinarily courageous woman, since she hit public attention through her uncommon exploits in NAFDAC, our paths finally crossed officially in 2009 when as the then Director of Army Public Relations I visited her office to invite her to deliver a keynote address as the Honourable Minister of Information and Communication at the first Bi-ennial Training Conference for Army Public Relations officers scheduled for Kaduna. I also requested her to use the opportunity to as well launch her pet project, the Re-branding Programme for the Nigerian Army. Our conversation in that first meeting and many subsequent ones were all it took for me to deconstruct the personality and disposition of Dora Akunyili as an embodiment of excellence and pragmatism.

I recall that though it was quite obvious that she had a loaded schedule that week, she became disposed to accepting the invitation the moment she got convinced that it was all about rebranding and the Nigerian Army. Evidently, she was duly persuaded that her consent would foster her passionate campaign for creating a better and appropriate image for Nigeria. Eventually, she not only made herself available for the function, but gave a highly thought-provoking keynote address that left no one in doubt that the treatise was a successful effort at inspiring patriotism in a crop of Nigerian professionals in the service of the nation.

Without any doubt, Prof Akunyili was a firm believer in the indispensability of the Nigerian Armed Forces in our nation’s drive for stability and progress. In an interview published in Nigerian Defence Magazine, she enthused, “when you thought there will be intractable problem, the military will stabilize the system, much to the admiration and pride of Nigerians”.

I also recall that my earlier visit to her office left me with a number of remarkable impressions and lessons. The simplicity in her interaction with staff and visitors alike radiates much peace around her. Despite this air, the sternness of the Honourable Minister in demanding efficiency and productivity around her was ever in the consciousness of all her immediate or personal staff. Anyone will take madam for granted at his or her own peril. She was unmistakably a disciplinarian. Further contacts only reinforced my earlier admiration of her personality as an embodiment of courage and passion for hard-work. Each contact was simply an incremental revelation of Dora Akunyili as a consummate humanist, a patriot, a nationalist, a pragmatist and above all, a strong believer in the Nigerian project. No doubt her life trajectory typifies the interrelatedness of incredible virtue, patriotism, service to humanity and development.

I was privileged to be at the reception in honour of her daughter whose traditional wedding held in Awgulu in 2009.   In her speech at the reception which was held in Awka later that day, she painted a very clear picture of how the family took the decision endorsing the marriage. I was so amazed by her boundless honesty and extra ordinary transparency in narrating what I thought should be a family secret at such an event. This attribute is also common in many of her interviews where she expresses in detail certain discussions between her and her spouse. Too down to earth whenever she means to explain a point, to achieve a didactic purpose. Her discussions with anyone proves she honestly means to teach virtues and values at every opportunity.

I still recall with awe the day she paid me an unscheduled visit in my former office at the Defence Headquarters before I was appointed Director Defence Information. I had hardly recovered from the surprise of the way she simply walked in following her aide who led the way when she walked in smiling and asking. “Is it true your daughter wedded and I was not informed?” I quickly refuted the information assuring her that I could never do such a thing without her being a special guest. She was satisfied with my explanation and she took the seat offered her. After exchange of hearty pleasantries, she quickly joined us to do justice to the groundnut we were munching when she came in. After the electrifying conversations with all of us in the office on many issues including “Halleluya diet”, she informed me of her new assignment as member of Presidential Committee on Relief for Flood Victims.

As I saw her off to her car, I noticed she was looking with a particular interest at the walls, the floor tiles and the entire surrounding. Once we were outside she said, “You know, there is need for us to imbibe and uphold the tenets of maintenance culture…”. I then realized why she had focused on the tiles and walls while walking down the staircase. That is vintage Dora Akunyili; down- to-earth, friendly and frank. Unlike many personalities, she does not go about with the airs or high horse common to a woman of substance and caliber that she was.

Professor Akunyili was honoured by the Nigerian Institute of Public Relations, with a Honorary Fellowship of the institute same day with then Chief of Army Staff (COAS), Lt Gen AB Dambazau in 2010. After completion of her own investiture ceremony in her office at the Radio House, Professor Akunyili offered to accompany the officials of the institute to the Army Headquarters to help them explain to the COAS, why the event for his own investiture was coming up a bit behind schedule. She went ahead to also participate in the investiture of the COAS.

When called upon to make a remark, she observed that the General had secured a PhD degree dating back for as long as 20 years. She challenged him to do the needful and proceed to be a professor and settle into academics to enhance knowledge for younger generation. The General took that challenge seriously. Today on retirement, General Dambazau is into academics with professorial chair in American University system.

Someday, I bumped into her while we waited to board a flight from Abuja to Enugu. As usual, we had a very exhilarating conversation. As we were boarding, she went to the Business class while I headed to the Economy. At the termination of the flight in Enugu, she waited for me after exiting the aircraft. Then she made fun of me wondering why a General would sneak to fly Economy Class. We had a good laugh over the experience while her husband, Dr Akunyili worked hard to save me with his defence as we all chatted. They both accompanied and ensured I was in the safe hands of soldiers who came to receive me, before they left the airport at Enugu. The last time I saw Professor Akunyili was on TV as a delegate to the National Conference. I could not believe that gaunt picture I saw of her. I quickly sent her this text message: “How are you doing ma? Seeing you so active at the National Conference is such a great delight. It is so inspiring and reassuring indeed. You have again demonstrated an exemplary act of courage and patriotism. I trust that our God, the great Physician is already perfecting your spirit, soul and body. Be sure I never ceased praying for you. It is well with you, our ever Honourable Prof”

Very much unlike her, she never replied that text message. That to me, spoke volumes. She had never left my call unanswered or fail to reply my text messages within minutes. I then knew that the ever dependable Prof is really not feeling very strong in body. Nevertheless, I trusted that she was as ever strong in spirit.

Dora, as she is fondly called by many, without doubt, gave her all to her country; she carved a niche for herself as a God-fearing, passionate, loyal, kind-hearted, dutiful and above all a patriotic citizen of Nigeria. Just as Obumneke Akunyili, her son stated recently, she was not just the mother of her children, she was mother of the nation. Mrs Oluwakemi Akunyili, wife of her husband’s younger brother got the audience emotional as she eulogized Dora’s caring attributes and relationship with other members of the extended family. She left the legacy of care for the people with the clinic whose construction she championed in her husband’s community against all odds. Is it possible to forget our Dora? Will it be out of place to name that Clinic after her in addition to other memorials?

Through a dint of hard work and sheer determination to excel, she broke the ceiling of achievement in male dominated environment. The intrinsic value of her philosophy of life which revolves around hard work, patriotism and service to humanity remains a lesson for us all to learn. Though she did not stay in this mortal world for very long, hers was a fulfilled life. Go in peace, our Amazon! May the great soul of Professor Dora Nkem Akunyili, rest in perfect peace.

Opinion: When The Truth Does Not Save But Destroys….Amaechi’s Burden Of Truth