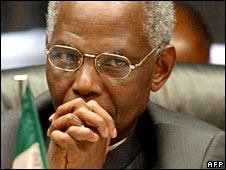 A former Minister of Petroleum Resources and erstwhile Secretary General of the Organisation of Petroleum Exporting Countries, OPEC, Rilwanu Lukman, is dead.
The late Lukmam was born on August 26 1938 in Zaria, Kaduna State and left behind a wife and 3 children.

He was appointed Minister of Mines, Power and Steel between 1984-85 and later Minister of Petroleum Resources from 1986-1989. As Petroleum Minister, he served as President of the Organisation for the Petroleum Exporting Countries (OPEC) Conference for several consecutive terms from 1985-1989.

From the petroleum ministry, he moved to foreign affairs ministry where he served as Nigeria’s Minister of Foreign Affairs (1989-90) – all during the military regime of General Ibrahim Badamasi Babangida.

He also served as Chairman of the Board of Directors of the defunct National Electric Power Authority (NEPA) from 1993-94. Furthermore, Dr. Lukman was elected as Secretary General of OPEC from 1995–2000.

It was from his position as Secretary-General at the OPEC Secretariat in Vienna, Austria that, in 2000 he was formally invited by former President Olusegun Obasanjo and appointed as Presidential Adviser on Petroleum and Energy Matters to the Federal Government of Nigeria and Chairman of the NNPC, until in November 2003, when he voluntarily retired from public service.

He was later brought out from retirement in active public service by the late Umaru Musa Yar’adua administration to serve again as Minister of Petroleum Resources from 2008-2010.