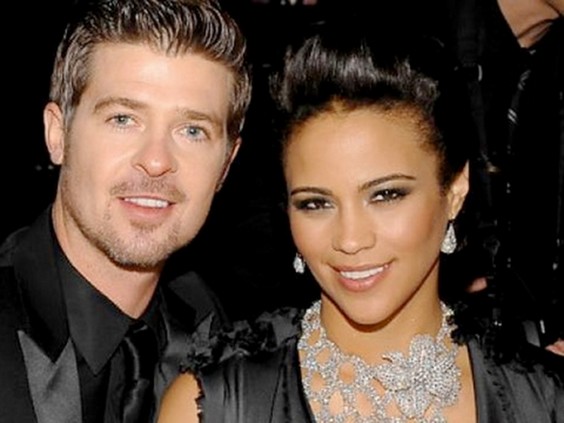 When news broke that Paula Patton and Robin Thicke were separating after 20 years of marriage, we were all genuinely shocked.  Since then, Robin Thicke has been on a very public campaign to win back his wife. Here’s the interview the singer granted the Hot 97 Morning Show. Credit: www.mobo.com..

On what to expect from his new album Paula:

I go back and forth from talking about her and then I’m speaking to you. So sometimes it’s about her, and sometimes I’m talking directly to her. […] It’s so hard for people who aren’t in our house to know…. the album and us breaking up has nothing to do with the success or what happened last year. It’s just two people that wasn’t working anymore. And I’ve always been the kinda person who wants to admit his faults so I can improve as a human being. So it’s like being an alcoholic. You gotta first be able to say, ‘I got problems.’ So this album is dedicated to her, but half it is about my problems and me getting certain things together so I can be the kinda man I wanted to be.

I try to keep most of that private but I haven’t seen her for four months, man. We cool. She’s the best girl in the world, great mother and still a good friend. But because we just weren’t ever together anymore, I still had so much to apologize for and things I wanted to take responsibility for. But I still wanna wish her well and let her know she’s a great person and she deserves to have a great life, so it’s not all a negative album. The album is exactly what happens when you lose the love of your life and you trying to figure it out in your head. ‘How am I gonna get through it all.’

On if she’s heard the album:

She hasn’t heard it. She’s only heard a few songs and I don’t think she wants to hear it right now. I think she probably, I can’t speak for her, but I think space is an important part of the healing process.

On messing up their relationship:

I’m a man and I messed up and I had to lie for a while and then I stopped lying. That was actually good for me because I was tired of lying so this whole album is me revealing everything. I think the only thing different with this album is, it’s never her fault. In real life, relationships aren’t like that, but in this point of our relationship, the only reason we’re not together is because of choices I made.

I knew exactly what I had. It’s not that simple. After 20 years, it didn’t work for 20 years because it wasn’t right. It was right, but sometimes people grow apart. You don’t build love in a day and you don’t lose it in a day.

[Cheating] is not why we’re apart. We’re apart because we just couldn’t be together anymore, for a while. There’s a hundred different reasons. There isn’t just one. There’s a long list. I changed and I got a little too selfish, too greedy, too full of myself.

How he’s dealing with pain:

The alcohol helps. My music is my therapy. When I make these songs and I listen back to them, they make me feel good about myself because at least I’m admitting my faults, I’m trying to become a better man, better person and better father. That’s what I have to do right now.

On still being cool with each other’s families:

All of our families are still very much in love. I invite her mom over for dinner. We have dinners together. We’re a whole family. She’ll [Paula Patton] take the kid to visit my uncle and aunt. It’s just right now, we don’t hang out.