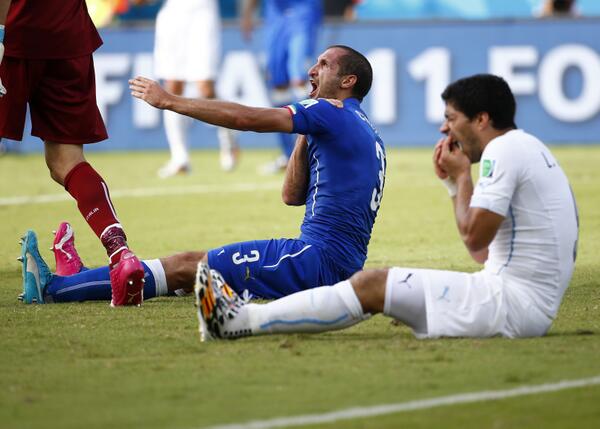 Uruguay striker Luis Suarez was at the center of another biting storm on Tuesday after appearing to sink his teeth into the shoulder of Italy defender Giorgio Chiellini during the teams’ decisive World Cup Group D game.

Suarez and Chiellini clashed in the Italian penalty area 10 minutes from the end of the match and the furious Italian pulled open his shirt to show the mark to the referee. Reuters photographs show what appeared to be bite marks on his shoulder.

The Italians were still complaining about the incident when Uruguay captain Diego Godin scored with an 81st-minute header to secure a 1-0 win that sent them into the second round and eliminated Italy.

“It was ridiculous not to send Suarez off,” Chiellini told Rai TV.

“It is clear, clear-cut and then there was the obvious dive afterwards because he knew very well that he did something that he shouldn’t have done.” Reuters News Agency

Suarez was banned for 10 games last year after biting Chelsea’s Branislav Ivanovic in a Premier League game and in 2010 he was suspended for seven games for biting PSV Eindhoven’s Otman Bakkal while playing for Ajax Amsterdam.

Four years ago he missed Uruguay’s World Cup semi-final against the Netherlands after being sent for a handball on the line that denied Ghana what would have been a match-winning goal in the final minute of extra time in a last-eight match.