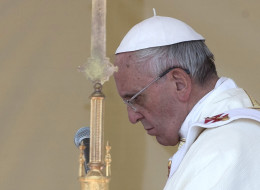 Pope Francis on Saturday took on one of Italy’s most dangerous organized crime groups, calling it an example of “the adoration of evil” and saying Mafiosi “are excommunicated”.

Reuters News Agency reports that the pope, speaking about the ‘Ndrangheta crime group during a mass in the southern Italy, issued the strongest attacks on organized crime since the late Pope John Paul lambasted the Sicilian Mafia in 1993.

“Those who in their lives follow this path of evil, as mafiosi do, are not in communion with God. They are excommunicated,” Pope Francis said in impromptu comments at a mass before tens of thousands of people.

He told the crowd: “This evil must be fought against, it must be pushed aside. We must say no to it.”

He branded the ‘Ndrangheta as the “adoration of evil and contempt of the common good” and said the Church would exert its full force in efforts to combat organized crime.