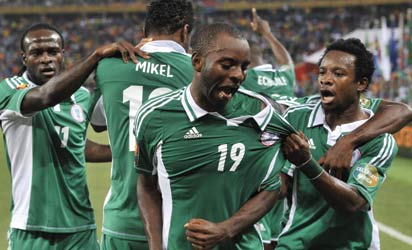 Super Eagles coach Stephen Keshi has revealed that picking his final 23-man squad was very tough, but there were no sentiments involved.

Keshi gave reasons for not including the African Nations Cup hero Sunday Mba, in his selection of the final man . Keshi said Mba had been late to Nigeria’s training camp due to a visa hitch but Keshi also revealed his disappointment at a lack of hunger from the CA Bastia man.

“His lateness to camp contributed (to his missing out) but outside that he did not show the hunger, the fight, we expected for him,” he said.

“We have only two and half weeks to prepare for the World Cup and he was not giving us what we wanted.

“He was very relaxed and it was unlike him.”

“This was a very tough decision to make. I wish I could have taken all 30 of them to the World Cup,” Keshi continued.

“They have been with us all this time and come this far and I think it’s unfortunate that not everyone can make it.

The seven cut players will be remain with the team until after tonight’s game against Greece.