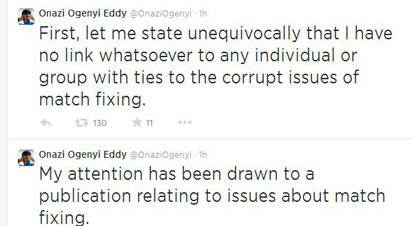 Super Eagles and Lazio midfielder, Ogenyi Onazi has cried out that he is not a match fixer and will never accede to any plan to bring the game of football to disrepute.

He continued “A certain Mr Okoroji was mentioned in the publication. My previous contact with Mr Okoroji was based on the fact that we are both Nigerians. As a matter of fact, I am surprised to learn that Mr Okoroji is a FIFA licensed agent. “

Agent Henry Chukwuma Okoroji was caught telling an undercover reporter that he could fix games and organise certain outcomes during the tournament in Brazil this month.

Speaking from a hotel room in Milan, the businessman and his associate – only known as Joe – told the reporter a list of prices he would have to pay for different outcomes, including a a red card.

In an attempt to enhance their credibility, the pair also invited Lazio and Nigerian footballer Ogenyi Onazi to the meeting, however there is no suggestion he was involved in any fixing plot.