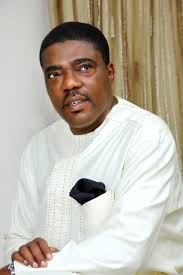 Lagos State governorship aspirant in the All Progressives Congress, Senator Ganiyu Solomon, has reacted to the endorsement of the former Accountant-General of the state, Akinwunmi Ambode, by the Oba of Lagos, Oba Rilwan Akiolu.

He said, “In making the pronouncement, the kabiyesi was expressing his preference. He has also expressed his personal opinion. We’re talking of a party now; I don’t know which part or provision of the constitution of the party says a traditional ruler can endorse. Whatever he says is his personal wish, which is not the same thing as the wish of the generality of the people. At the end of the day, we have a party structure.”

“Let me also tell you that he made the pronouncement at a time when we had not even concluded putting party structures in place. So, it (the endorsement) couldn’t have been in consultation. Consultation with who? Is it with the political leadership? Is it with the traditional leadership? We’ve had different opinions since then. We deliberately did not come out to say anything about it because we felt it was a political statement. And what do you do with political statements? You either respond or you leave it. In this case, we decided to leave it.”

He maintained, “It has happened a number of times when a traditional ruler in one state would say, ‘this is the person we want.’ At the end of the day, the man would not go anywhere. It has happened several times. I don’t want to cite instances. Even in Lagos, it has happened. In our own case, such statements would not deter us. It will not deter the party man. You go around, meet them. They (supporters) are determined. This time around, they want to have a say in who becomes their candidate, and who eventually rules their state, because we are all stakeholders, just like any other person. What is the weight of a vote? Every vote carries the same weight, regardless of the status of the individual.

“So, what anybody can do is to go behind his chosen, preferred, aspirant; mobilise people behind him and provide a level playing field. There must be transparency. Whoever wins becomes the party’s candidate, every other person queues behind him.”