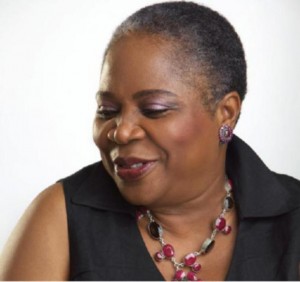 Nigerian talented singer and politician, Onyeka Owenu has said  the Principal of the Government Secondary School where Boko Haram attacked and kidnapped 300 students listed a 60-year-old as a school pupil.

Speaking on Channels Television flagship program Sunrise Daily she said mistakes were made by the Federal, Borno State and local governments leading to the abduction of the school girls.

Ms Owenu a close associate to Nigeria’s First Lady, Dame Patience Jonathan questioned why a 60-year-old would have been attending a secondary school and added that some imposters were posing as mothers of the Chibok girls during #BringBackOurGirls protests in Abuja.

In defense of the First Lady who had earlier questioned the School Principal and key officials of the Borno State Government over their role in the abduction of the girls,  she says First Lady would have led #BringBackOurGirls protests if protesters had gone to meet her.

“I have never met anyone as down to Earth as the First Lady. She has a wonderful heart. We ought to thank her.” – Onwenu said.

Onwenu, the singer extraordinaire went on to state that the First lady’s work is more behind the scenes and she had been asking questions before she called for meeting.

Even though she emphasized she was not on the show to speak for the First lady, she spent most of the time defending the wife of the President who has come under public scrutiny for accusing the government officials of being Boko Haram members wanting to embarrass her husband.

Onwenu, a mother who has not been part of any of the Protest, none that newswirengr is aware of,  maintained that the protest has helped the nation to focus attention on rescuing the abducted school girls, as more than 200 are still missing 26 days after.

“There should be no name calling at this stage. No government is perfect. This is the time to come together “- Onyeka explained. She went on to state that the abduction is going to help the country streamline security operations, information gathering.

“This is not a time for finger-pointing “- Onyeka concluded.

Nigerian President Goodluck Jonathan said Saturday that he was worried about the girls and thanked other countries, including the United States, that have pledged support in finding them.

“We promise the world that we must get these girls out,” Jonathan said.

U.S. and British officials are in Abuja to help Nigeria’s government look for the girls, plan rescue missions and advise on ways to subdue Boko Haram. China and France are also helping in the search. A statement from Jonathan’s office Sunday said Israeli Prime Minister Benjamin Netanyahu promised to send a team of counterterrorism experts.

Breaking: Missing Schoolgirls Will Not Be Released Until B’Haram Prisoners Are Freed -Shekau