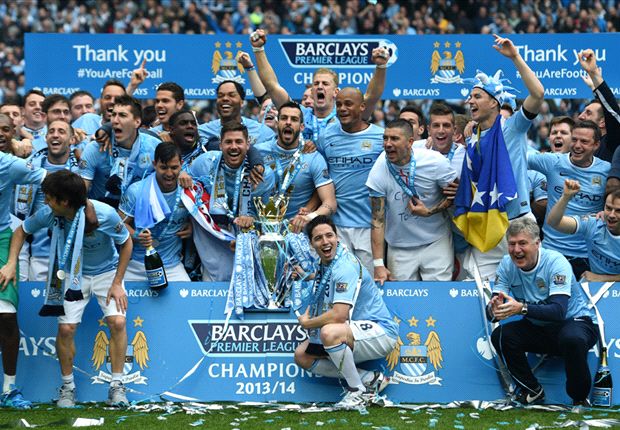 Manchester City have been crowned Premier League champions after their comfortable 2-0 victory over West Ham at the Etihad Stadium on Sunday afternoon.

The result rendered Liverpool’s 2-1 win against Newcastle meaningless and sees City lift the title for the second time in three years, having missed out to Manchester United last season.

The trophy marks Manuel Pellegrini’s first league league title since leaving South America for Europe in July 2004, and is his second piece of silverware this term after guiding City to Capital One Cup glory earlier this year.

A goal in each half from Samir Nasri and Vincent Kompany sealed the win over West Ham, while Liverpool went a goal down at Anfield and required second-half strikes from Daniel Agger and Daniel Sturridge to end their campaign with a victory.

Chelsea were also forced to come from behind in their final game of the season at Cardiff City. Ole Gunnar Solskjaer’s side, who were already relegated prior to the match, took the lead through Craig Bellamy but goals from Andre Schurrle and Fernando Torres secured the win for Jose Mourinho’s charges, who finished in third spot.

Ryan Giggs finished his stint in temporary charge of Manchester United with a 1-1 draw at Southampton after Juan Mata cancelled out Rickie Lambert’s opener.

Tottenham secured their place in next season’s Europa League with a 3-0 victory over Aston Villa at White Hart Lane.

At the other end of the table, Norwich’s relegation was confirmed; the Canaries were beaten by 2-0 Arsenal at Carrow Road and will join Cardiff and Fulham in the Championship next term.