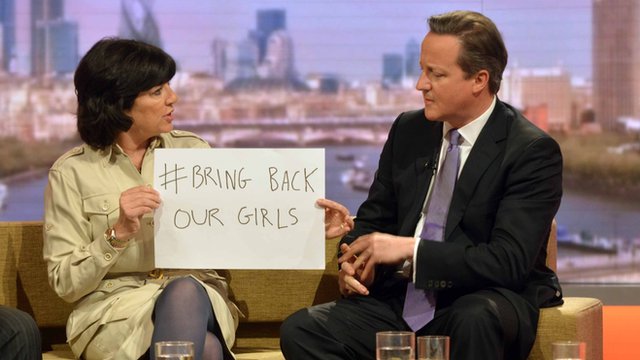 Prime Minister David Cameron has promised Britain “will do what we can” to help find more than 200 kidnapped Nigerian schoolgirls.

He made the comments as he held a sign bearing the “#Bring Back Our Girls” slogan on the BBC’s Andrew Marr show.

Mr Cameron is the latest high-profile supporter of the social media campaign after US First Lady Michelle Obama was pictured with a similar poster.

The Islamist militant group Book Haram has claimed the abductions.

During the programme, fellow guest Christiane Amanpour, CNN’s chief international correspondent, handed Mr Cameron the sign and asked if he would like to join the campaign.

Taking it from her, he replied: “Happily.”

He told the BBC One programme: “I rang the Nigerian president to offer anything that would be helpful and we agreed to send out a team that includes some counter-terrorism and intelligence experts to work alongside the bigger American team that’s going out there.

“We stand ready to do anything more that the Nigerians would want.”

He said it was unlikely Nigeria would ask for British troops to help but added: “I said to President Jonathan where we can help, please ask, and we will see what we can do.”

Mr Cameron also spoke of the importance of tackling extremism around the world.

“Also, let’s be frank, here in the UK there is still too much support for extremism that we have to tackle, whether it’s in schools or colleges or universities or wherever.”

He recognised it was not an easy task to look for the girls, who were taken from their school in Chibok on 14 April.