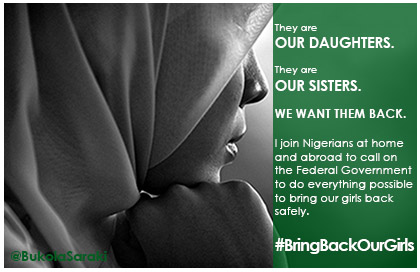 The first lady, Dame Patience Jonathan, has promised to stage a protest match to Chibok, Borno, if the abducted schoolgirls were not released.

Mrs Jonathan said this in Abuja after a meeting with governors’ and ministers’ wives, female senators, commissioners and more than 200 women from various groups at the State House in Abuja.?

The meeting was to seek the actual whereabouts of the kidnapped girls.

According to her, a committee will be inaugurated to include wives of all relevant stakeholders at a meeting scheduled for May 4.

She said that refusal of any of such relevant stakeholders to be contacted for the meeting would also lead to a mass protest.

“I cannot perpetuate hearsay and rumour; I must have facts to tell the international community.

“We will set up a committee to seek the truth as women.

“If any of those we call refuse to come, we will take the protest to Chibok.

“I do not mind being shot as long as they return our girls to us safely, we are tired of the kidnapping,” she said.

Jonathan said that the first ladies of Cameroon, Chad, Niger and various other countries had called to ask questions and offer assistance on the matter.

“They intimated me of their readiness to help, they also asked me questions that I could not answer ?and as women we are the last hope of this nation. We cannot fail our fellow women and the nation.

“If need be, we will call on the northern elders to help us so that our children and husbands will not die,” Jonathan said.

The Head of WAEC, National Office, Mr Charles Eguridu, at the meeting gave a clarification over the number of students enrolled for the examination in the school.

Eguridu said that those registered in the Government Girls School, Chibok include a total of 530 made up of 395 girls and 135 boys.

“The school had been reverted to a mixed school but the name remained Government Girls School.

“We were able to relocate 189 of the total number to write their exams at another village called Uba?,” Eguridu said.?