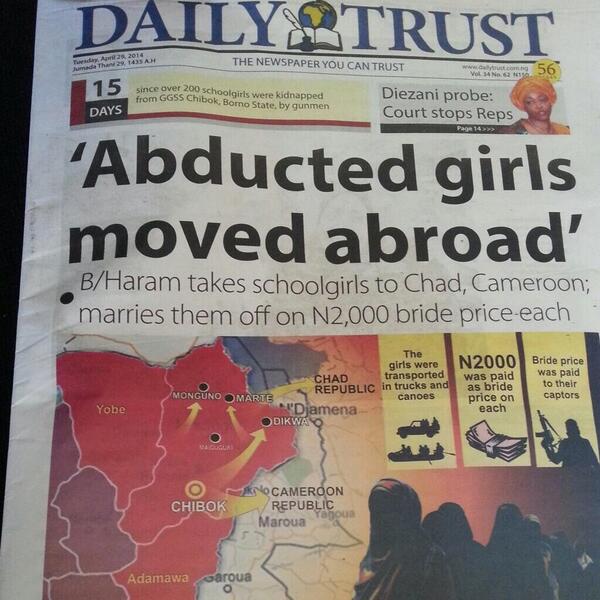 On Monday 14th April 2014 over 200 young female students from the Government Girls Secondary School Chibok, Borno State were abducted by heavily armed men and as at today the whereabouts of the girls remains unknown. These young girls are daughters, sisters, nieces, cousins and friends of our fellow Nigerians and we want them back Safe in their homes where they belong.

The poor handling of information about the exact number of girls who are still missing and the fact that as yet, no one has claimed responsibility for the abduction of these girls give us great cause of concern.

As citizens it is our responsibility to ask the questions which have been on the lips and on the minds of millions around the world.

1. Why has more protection for our children in schools in the N.E not been provided even after the devastation and pain of the 59 innocent children murdered in FGC BuniYadi on February 25 2014?

2. How is it possible in the age of drones and Google Maps and aerial shots that over 200 girls will vanish without a trace?

3. How is it possible that in places where there is a state of emergency 4 trucks and numerous motor bikes can move around in convoy – undetected by the military – into the school at Chibok and then out of the school and to a location unknown?

4. Why, despite the massive increase in federal military spending, Nigerians not safer than they were a few years ago? Why despite these huge amounts do we keep hearing that our heroic soldiers are under equipped and under prepared to face the terrorists.

We as concerned Women under the umbrella of “Women for Peace and Justice” are organising a 1 million woman protest march and rally to bring the plight of these girls to world. The protest march will be held on Wednesday 30th April 2014 from 3pm to 8pm. The procession will start from the Unity Fountain, Maitam [ by Trancorp Hilton] and march to the National Assembly to and the office of the National Security Adviser to deliver letters to the Senate President, Speaker and National Security Adviser respectively.

The procession will then march back to the Unity Fountain and the selected spokes person will address the crowd and the media.

Please let me know if you need any additional information,