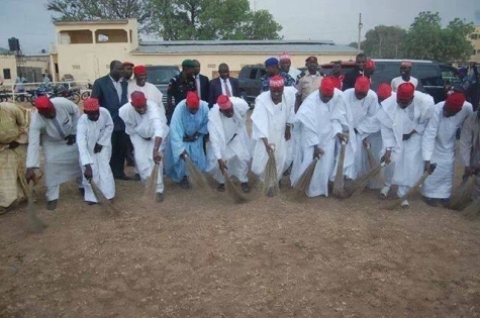 As a result of President Jonathan’s visit to Kano state yesterday; a day after the Nyanya bomb-blast in Abuja, criticisms have started flying in.

In separate interviews with Punch Newspaper, Prof Ango Abdullahi who is the spokesman of the Northern Elders Forum and Dr Junaid Mohammed condemned the President’s visit to Kano despite the sorrowful mood of the nation.

Abdullahi condemned the President for making the trip to Kano at such a time when lives have been lost. He recalled that the President had embarked on a similar visit to Katsina recently

“This is not the first time. Only recently in Katsina, when several people died, the President went on with his campaign. This is not the first time, it shows how callous the leadership of this country is.
“This is why people are asking so many questions whether they are even concerned about the insecurity that we are in and whether they are really taking serious steps to end it.
“This is really another tragedy which should have kept everybody in their houses or their offices in a remorseful mood and talking about how to prevent future occurrences. What we are seeing is ceremony, rallies and speech making without concern.
“The fact that the President was physically present in Kano shows his level of concern for this tragedy. This big tragedy is a reflection of where we are as a country. Everyday we hear of 50, 100, 200 people dying yet there are rallies going on. I am not surprised that this is the attitude being exhibited by the people at the highest level.

Dr Junaid on his part sees the President’s visit to Kano as an act of irresponsibility.

“The President’s trip to Kano on a political campaign was thoroughly irresponsible.
“It portrays the President as being grossly insensitive and that he cares more about winning or rigging the election in 2015 than the lives that were lost in the capital, a stone throw from where he resides.
“And if this kind of insensitivity and irresponsibility which has characterised his Presidency so far, it shows you that he does not stand a chance of winning elections in the North because this violence happened in Abuja and Abuja happens to be situated in the centre of the North.
“If he cannot be with the people of the North in Abuja, he cannot be with them in the North. As strategic as Kano is, it cannot be more important than the rest of the North,”

I Will Defeat Jonathan In The 2015 Elections, Rabiu Kwankwaso Fires Back