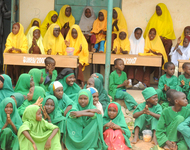 The Borno Government on Wednesday pledged N50 million ransom for information that would lead to the rescue of the abducted students of the Government Girls Secondary School Chibok, Chibok Local Government Area (LGA) of the state.

The girls were abducted by suspected Boko Haram insurgents on Monday.

Gov. Kashim Shettima, who made the pledge while addressing newsmen in Maiduguri, described the abduction as ”unfortunate.

“I want to make a pledge of N50 million to any individual or individuals who can supply credible information that will lead to the rescue of the abducted girls.

“The principal has requested parents who had children in the school to come forward with necessary information.

“It was based on the information supplied that about 50 girls have so far been confirmed missing.”

Shettima said that the school authorities had so far identified about 50 students missing after making contacts with parents.

The governor said that it was impossible to state categorically the number of girls abducted from the school at present.

“Let me inform you that 10 of the abducted girls escaped from the hideout of the abductors today after they were asked to clean up utensil used for cooking.

“This bring the total number of girls so far rescued to 14 as four other were rescued yesterday.”

Shettima said that the state government was in constant touch with the school authorities with a view to monitoring developments.

“The Commissioner for Education is in constant touch with the principal of the school.

“I am also in constant touch with both the district head of the village and the principal for regular updates.

“We are willing, as a government, to go to every length to ensure that the innocent girls are rescued unhurt.

“I plan to relocate to Chibok and spend a day or two until we make appreciable progress in the rescue of the girls.”

He expressed confident in the capability of the Nigerian Armed Forces to rescue the girls.

“There is an ongoing military operation for the rescue of the girls.

“I believe that the Nigerian Armed Forces, being one of the best in Africa, will succeed in rescuing them.”