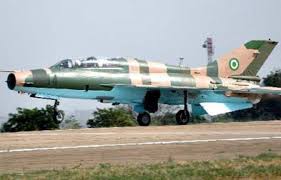 The Federal Government of Nigeria has approved the acquisition of new fighter aircraft and helicopters for the Nigerian Air Force as well as the upgrade of some of our existing platforms to enable the service perform it roles.

The Chief of Air Staff (CAS), Air Marshal Adesola Amosu made the disclosure during a Media Briefing on the occasion of Nigerian Airforce 50th Anniversary Celebration at the Airforce Headquarters Abuja.

Amosu who commended President Goodluck Jonathan for living up to his full responsibility of ensuring that necessary resources needed to sustain the NAF are always available, also gave the assurance that the military would stabilise the country from the current security challenges in the country.

Responding to current security in the country, Amosu said that: “We must stablise the North-East and we must ensure that elections take place, democracy is something vital to our nation and we are defenders of democracy. So, everything that we need to do, any kind of sacrifice that is in place to ensure that security is ensured, we have to do it,’’ he said .

Amosu noted that one of the challenges the military was facing in the North-East was the lack of information by citizens, adding that their cooperation was needed in the fight against the insurgency.

According to him, the war against insurgency is a collective responsibility of all Nigerians.

The Chief of Air Staff said that with necessary information, perhaps the North-East would have been stabilised by now.

“Once we get information, you will see the changes that will take place.’’

Amosu noted that the Air Force had earlier scheduled to hold the 50th Anniversary alongside the Bi-annual Air Expo, but had to postpone it.

He said the expo was postponed because of the security challenges and the role of the Air Force in the fight against the insurgency.

“In order to tackle headlong the insurgency challenges and stabilise the North-East without reducing our efforts, we sincerely regret any inconveniences this may cause our friends and partners.

“A new date will be announced in due course as the sovereignty and security of our nation is paramount,’’ the CAS said.

Amosu said that the 50th Anniversary of the Air Force was coming on the heels of national Centenary celebrations, adding that 50 years of loyal and dedicated service to the nation was not a small feat.

He said the Air Force had continued to play a critical role in ensuring the security and inviolability of Nigeria’s airspace.

Amosu said that the activities to mark the golden jubilee, included jumat prayers and church service scheduled to hold on April 11 and April 13, respectively in all Air Force bases.

He said that a civil-military outreach to the public by Air Force medical personnel and the Nigerian Air Force officers Wives Association would be held on April 14.

Amosu said that the event would be rounded up with an anniversary dinner, adding that key individuals would be honoured and decorated with NAF 50th anniversary commemorative brooches.