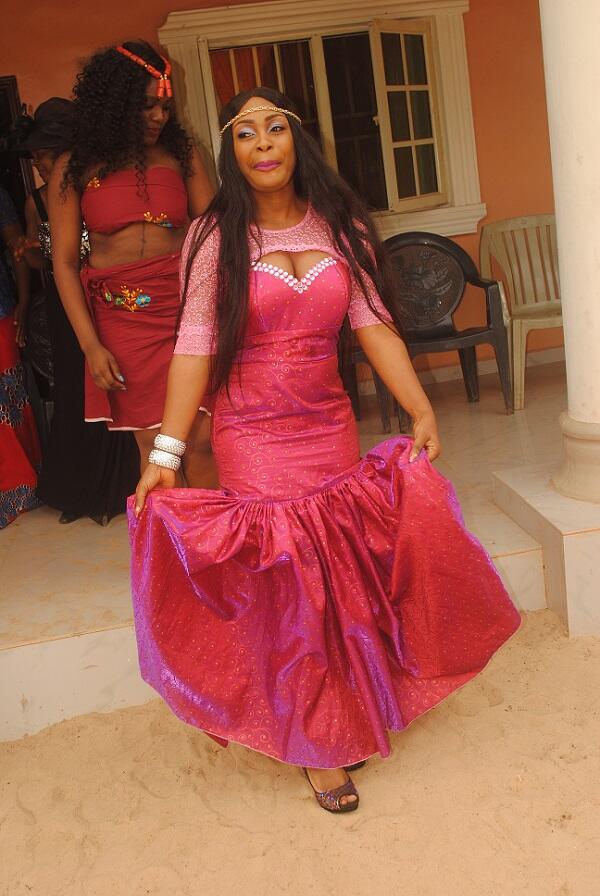 Read below an article written by Charles Novia over the controversy that trailed Tchidi’s estranged wife, himself and his new wife Nuella..

One of the best brains we have in Nollywood would be Tchidi Chikere, a celebrated scriptwriter and movie director. With an impressive body of work in the past decade and a capacity to discover new stars or to enhance sagging careers of others, Tchidi is not a personality one can ignore in Nollywood.
I have known him in a professional capacity for close to fourteen years and I relate well with him in the few instances we have met and had discussions. Tchidi has a burning desire to make a change in Nollywood, to shoot movies which somehow should re-calibrate society’s moral journey. I particularly love some of his movies for the uncanny way he brings out everyday characters in simple lifestyles and turn them to complex evolutionary beings in complex situations. As a movie director and a scriptwriter, Tchidi is gifted. Very gifted. Take it from me.
In my usual no-holds-barred critique of his acting, I would be less charitable in my accolades. But I am not writing this to detract from his credentials as a celebrated auteur. I am writing this out of concern, perhaps more professional but with a huge personal slant to it as well.
It is a well-known fact by now that Tchidi got married to an actress, Nuella, a few days ago. First of all, Tchidi, I must congratulate you on that. Whatever the opinions people have, we must all respect the wishes of consenting adults when it comes to tying the knot. He made a choice and we should respect that, no matter how much the slanderous anonymous commentators on social media think they know.
That Tchidi got separated from his former wife, Sophia who bore him three children is perhaps unfortunate but like I said, consenting adults take decisions which they believe is best for them at certain stages in life. Such decisions might come much anger and recriminations and would always leave scars in the hearts of both parties. Divorce or separations are never pleasant.
My concern in this case has to do with the open fights between Tchidi and Sophia on social media after Tchidi’s new marriage. On face value, it would seem to have started with Tchidi’s rant on twitter a couple of days back against his ex-wife.
The tweets were quite shocking and less than charitable, to say the least. Though from the tweets, one could psycho-analyse that Tchidi was really angry, hurt and perhaps deliberately hitting below the belt at his former wife. My first reaction when I read those tweets on a blog was one of shock. Those tweets were totally uncalled for. Totally. Granted, they might have been written in a miasma of negative volcanic emotions but total restraint is required from a man in those kinds of circumstances. And such restraint is justified when the mother of your blood children is involved!
Sophia had a riposte which I read as well and she had a moral right to respond too. But something tells me that Tchidi would wish to fire another salvo at that response and thus start social media bric-a-brac which would inflict more wounds on all parties. That is why I had to write this open opinion.
In Nollywood, and perhaps to a small extent the entertainment industry in general, most of the creatives tend to look away when acrimonious matters befall one of their own. First reactions would be one of aloofness, followed by private gossip in meeting places. Sometimes, colleagues and friends of such personalities would whisper malicious things about the subject in private while pretending to be all coy and concerned when they meet the suffering subjects in public. Oh Yes! My sector have some sycophants and pretenders as with politics but isn’t that how life goes?
Perhaps Tchidi and Sophia are being wrongly advised by masquerading friends? Or maybe they are not even being advised at all by anyone but are just ventilating on social media, giving bloggers more hits and the country one more piece of idle gossip?
Whatever the case, I will openly advise Tchidi to stop further tweets or replies on this matter. For the record, I don’t know Sophia or Nuella and haven’t met with any ever and don’t wish to. My concern, as a father, is for the kids from Tchidi’s first marriage and perhaps future kids from this new marriage. Do not celebrate your misgivings on social media. Sheath the swords. Think of the children. The children. The children.
Those poor kids are going through indescribable torture and pain already. You don’t need to add fuel to their discomfort. Angry words once written and published are hard to take back, even with the passing of time.
Celebrities are human too. That you see us on the screens or read about us does not make us less human than the other fellow. Fame and fortune only hide our foibles and finnicks. But we are human. However, whilst we are human, there are expectations of decorum we all must adhere to. And if it is just for the kids, Tchidi and Sophia (and perhaps Nuella) must adhere to the dictates of decorum.
I am not writing this to take sides or blame any of the parties involved. I am writing this openly because whatever linens being displayed by all parties in the open should be brought down immediately.
May God help all parties pass through this period and bless them all as they move on to the next phase of their lives.

Photos From The Star Studded Launch Of The Juice Season 2 At Wheat Baker, Ikoyi