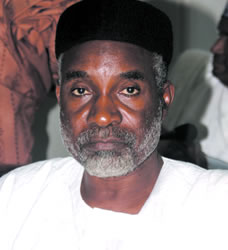 The governor of Adamawa State, Murtala Nyako, on Sunday said President Goodluck Jonathan, had once again demonstrated a lack of humility in his approach to issues.

Nyako was reacting to comments made by the President during the North-East rally of the Peoples Democratic Party on Saturday.

Jonathan had accused governors of the North-East for abdicating their responsibility of educating youths in their states. This, he said, was largely responsible for the Boko Haram menace.

In a response which was made public by his Director of Press and Public Affairs, Mr. Ahmad Sajo, Nyako said it was unfortunate that the President has chosen once again, to blame everybody but himself, things going wrong with his government.

He said the decision of the President to shift blame to governors, is not a mark of good leadership.

He said, “We also wish to draw the attention of the President to the fact that over 800 classroom blocks were destroyed in Borno state.

“Several Schools were damaged and closed down in the affected states including Federal Government Colleges even though the President said his government has no responsibility for Secondary Education.

The governor said if there is any proof of bad governance, it will be located in the way and manner the President executes his priorities and the kind of statements he and his spokespersons make.

Governors, he said, are not and cannot be held responsible for security challenges since they have no control over security apparatus.

“The President is the Commander-in-Chief with powers over the Armed Forces, Police and other security agencies. On the issue of education, the President is either being mislead or is totally ignorant,” he said.

Nyako equally explained that, the name Boko Haram was coined by the Media in response to University graduates destroying their certificates in the very city of Bauchi where he made the latest statement. So it is not about University Education.

The Adamawa State governor also challenged President Jonathan to tell the world what his administration has done to improve Adamawa State since he assumed office.

He noted that his administration (re) constructed all the Federal Roads in our State, built the Nigerian Law School, built structures for the Army, Police and other security Agencies including the Prison Headquarters. These, he pointed out, are all responsibilities of the Federal Government.

He urged the President to check the records of Adamawa State at the Universal Basic Education Commission, since 2010 to see the level of commitment the Nyako administration has been to education.