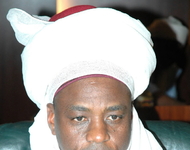 The Sultan of Sokoto, Alhaji Sa’ad Abubakar III, has been nominated as a speaker at a symposium on Cultural Diplomacy and Religion in the Vatican City of Rome.

The symposium is to hold from March 31 to April 3.

This is contained in a statement signed by Mr Dickson Omoregie, Country Representative of the Institute for Cultural Diplomacy (ICD) in Abuja.

The statement was made available to the News Agency of Nigeria (NAN) on Saturday.

The ICD said that the symposium would explore the use and potential of inter-faith dialogue to promote discourse with the ultimate goal of global peace.

It said that the symposium would provide a forum that would unite religious leaders with politicians, diplomats and academics in order to create cultural platforms.

“The symposium will have the theme, “Promotion of World Peace through Inter-Faith Dialogue’’.

“Speakers and delegates during the symposium will include religious and spiritual leaders, leading politicians and diplomats, senior academics and other dignitaries from around the world,” the institute said.

“The Vatican City is expecting 11 speakers at the symposium,’’ it added.

NAN reports that ICD was founded in 1999 as an international, non-governmental organisation with headquarters in Berlin, Germany.