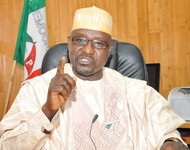 Alhaji Ahmed Gulak, the Special Adviser to the President on Political Matters has said that President Goodluck Jonathan should not be vilified in his effort to surmount the national crises he inherited.

Gulak said this on Wednesday in Abuja when he received a delegation of the youth wing of the National Coalition for Jonathan/Sambo Presidency (NACOJSP).

The special adviser said “Jonathan inherited many of the challenges our country is facing.

“The insurgency in many parts of this country, the militancy and kidnapping were crises that this government met on ground.’’

He said that Nigerians needed to hail the Federal Government for whatever achievements it had garnered given the crises that it was mandated by the people to curtail.

Gulak said that the Almajiri schools established by the Jonathan government would go a long way in addressing the Boko Haram insurgency.

“This government has invested in our rail and power sectors as well as in building the necessary infrastructure to make our youths productive and give them a sense of fulfillment.

“His government has conceded to the yearnings of Nigerians for an avenue to seat and discuss our common nation-building challenges by convening the National conference.

“It has shown commitment to reduce to the barest minimum all our national challenges,’’ he said.

In his presentation, the National Patron of NACOJSP, Dr Benjamin Irikefe, said that mobilisation of the youths would help to eradicate the menace of Boko Haram.

“The youths are at the centre of global discussions today because of their potency to curtail national calamities.

“This government should use us to bring peace and tranquility to this nation,’’ he said.

Related Topics:politicsPresident Goodluck JonathanAlhaji Ahmed GulakSpecial Adviser to the President on Political Matters
Up Next

INEC Commissioners Pledge To Ensure Free And Fair Election In 2015