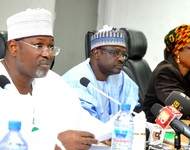 Some resident electoral commissioners of the Independent National Electoral Commission (INEC) on Wednesday pledged their collective resolve to ensure free and fair election in 2015.

They gave the assurance in separate interviews with the News Agency of Nigeria (NAN) in Port Harcourt on Wednesday.

The commissioners said that the commission was putting necessary mechanism in place to ensure a crisis-free general elections next year.

Mr Aniedi Ikoiwak , the Resident Electoral Commissioner for Rivers, urged political parties to cooperate with INEC to a avoid recurrence of the 2011 election crises in the country.

“INEC is ready for the forthcoming elections, we are doing our best in putting up every infrastructure to make sure we take care of some lapses.

“The 2015 election time table is timely, though criticised by some parties; I advise political parties to accept the time table as it was duly drafted in line with electoral law.

“We had a stake holders meeting with various political parties and also held a debate by the commissioners in the commission before the time table was drafted.”

Mrs Telma Eremiren, INEC’s National Commissioner in charge of Lagos, urged the electorates to take advantage of the continuous registration of voters.

She said the issuance of a bio-metric registration card by INEC would correct most of the election anomalies experienced in past elections.

Erimiren said the commission would ensure that adequate voter education was conducted in the rural rural areas to guide the electorates.

Only Registered Members Would Be Considered Delegates And Contestants – APC