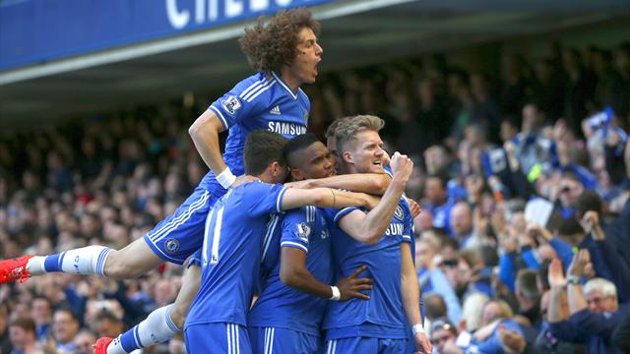 Chelsea humiliated Arsenal with a 6-0 victory on Arsene Wenger’s 1,000th game in charge for Arsenal.

Chelsea scored first on five minutes when Samuel Eto’o curled a left-footed shot past Wojciech Szczesny from the edge of the box, just after Olivier Giroud wasted a great chance. Three minutes later, Andre Schurrle made it two from the same spot after receiving a pass from Nemanja Matic.

On 15 minutes, Eden Hazard’s shot, already going wide, was handled by the diving Alex Oxlade-Chamberlain. Andre Marriner then mistakenly sent Kieran Gibbs off as the match descended into farce. Hazard converted the penalty, stroking it down the middle of the goal.

On 42 minutes, Chelsea scored their fourth when Fernando Torres crossed from the right for Oscar to blast into the net.

The second half was far less frantic, with Santi Cazorla dragging his shot wide, and Oscar having a shot tipped over. Then, on 66 minutes, Oscar made it five when his low shot from the edge of the box was missed by Wojciech Szczesny’s dive.

Mohamed Salah then scored his first Chelsea goal, running onto a Matic long ball to finish low past Szczesny. It remains Chelsea’s title to lose.