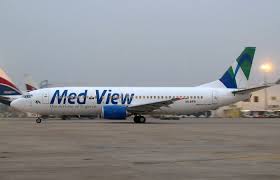 The Public Relations Officer of MedView Airlines, Mr Obuke Oyibotha, said the operations of the airline had not been grounded because of an “air-return” incident involving one of the airline’s planes on March 15.

Oyibotha told journalists on Monday in Lagos that the airline’s operations were not grounded by the aviation authorities as reported in the social media.

“Our operations have not been grounded by any of the nation’s aviation authorities as being speculated by some people using the social media.

“We want to appeal to the general public and our customers to disregard the misleading information,’’ Oyibotha said.

He said that safety was the hallmark of the airline.

The spokesman said that the air return on March 15 was a precautionary measure by the airline in line with international best practices.

He noted that he incident did not disrupt the airline’s flight schedule.

Oyibotha said the aircraft involved in the incident had since March 16 undergone mandatory test flights, ordered by Nigerian Civil Aviation Authority (NCAA) and had been certified to re-enter service.

He said that the airline received a clean bill of health for its aircraft after a test the flight conducted NCAA inspectors.

“NCAA conducted a-30 minute test flight with the aircraft to Ibadan and back to Lagos with the inspectors on board.

“On arrival, the inspectors okayed the aircraft to re-enter into service; they found nothing wrong with the aircraft.

“Their findings are that what was mistaken for smoke that triggered the fire alarm could have been thick fog from the aircraft cooling system.’’

He commended the management of NCAA for timely action in conducting the check on the aircraft and releasing it for normal operations.