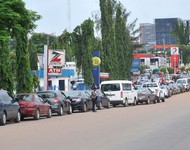 The Nigerian National Petroleum Corporation, NNPC, at the weekend, said it has pumped additional 956, 501,315 million litres of premium motor spirit, petrol, to the market as part of efforts to restore normalcy to the fuel situation in the country.

Ibrahim said,“The nation has 956,501,315 million litres of petrol which is equivalent to 24.4 days sufficiency and this will continue to increase to over 30 days sufficiency before the end of March.”

He reassured Nigerians that the NNPC, as the nation’s supplier of last resort was working round the clock to wet the nation with petroleum products to mitigate the hardship encountered by motorists on fuel queues.

The NNPC spokesman called on motorists to avoid panic buying, assuring that everything was being done to restore sanity to the supply of petrol.

Directorate Of Employment Trains 1,540 In Vocational Skills In Edo