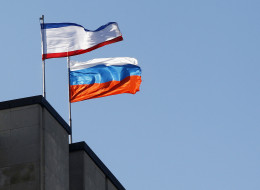 Crimea’s parliament on Monday declared the region an independent state, after its residents voted overwhelmingly to break off from Ukraine and seek to join Russia.

In the same resolution, it said that all Ukrainian state property on the territory of the Black Sea peninsula will be nationalized and become the property of the Crimean Republic.

Sunday’s referendum is not recognized by the West, and the United States and the European Union are preparing sanctions against Russia, whose troops have been occupying Crimea for several weeks.

Crimean lawmakers have asked the United Nations and other nations to recognize it.

A delegation of Crimean lawmakers is set to travel to Moscow Monday for negotiations on how to proceed further. Russian lawmakers have suggested that formally annexing Crimea is just a matter of time.

Related Topics:RussiaworldConflictCrimeaPutinUkraineKievWorldPost News
Up Next

Nigerians Are Corrupt- President Mugabe Takes A Swipe At Nigeria