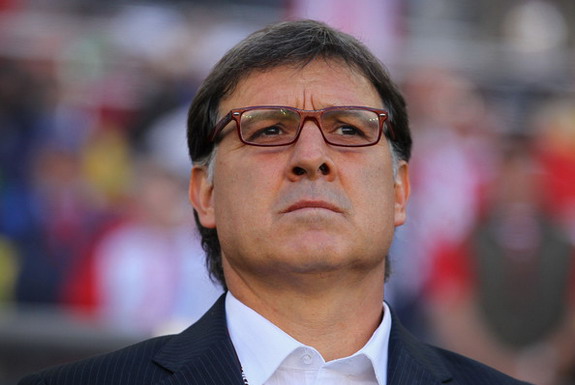 Barcelona manager, Gerardo Martino has revealed his side could win a treble this season despite watching his team lose 1-3 to Real Sociedad last week. Barca is three points behind Liga leaders Real Madrid. The spanish giants are also leading Manchester 2-0 on aggregate after the Champions league round of 16 games.

“Back at the start of the season, all of us would have settled to be in this position – we are still in with a chance of three trophies with 20 games left to play,”

“We still have options and we are going to battle to win everything. When you suffer a defeat, you always want the next game to arrive as soon as possible so you can put it behind you.

“Whenever I have coached a side which is self-critical, like this Barca side is, I know that their reaction will be faultless.

“Their [the players’] words sum up what this club is about. I feel flattered by their support and the way they placed the blame on themselves and not me. If we remain united, everything else doesn’t matter,”  Martino told reporters

He also spoke of the upcoming derby between two title hopefuls; Real Madrid and Athletico Madrid

“If we win our match, we’ll be left with three possible outcomes. We have to play against both Madrid and Atletico and ideally, we want to reduce the distance between them before we meet,” he continued.

“It’s impossible for us to ignore what happens in the derby but whatever happens, we still need to beat Almeria.”