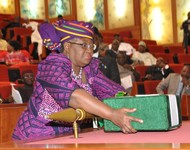 The Coordinating Minister for the Economy and Minister of Finance, Mrs Ngozi Okonjo-Iweala on Friday, challenged accountants to address leakages in government revenue and wastages in expenditure pattern.

Okonjo-Iweala, represented by her Permanent Secretary, Mrs Nwobia Daniel, gave the charge at the opening of a two-day retreat in Kaduna.

The retreat was for Directors of Finance and Accounts and Heads of Internal Audit in Federal Ministries, Departments and Agencies (MDAs).

The minister said the retreat was to remind them on the importance of their roles in the government’s transformation agenda.

“The Federal Government therefore, expects that the retreat will discuss issues that will tackle the challenges of leakages in government revenue and wastages in expenditure patterns in MDAs.

According to her, the participants are also expected to come up with strategies to ensure prudence in management of limited financial resources available for government’s use.

“At the end of the retreat, deliberate policies aimed at minimising corruption and strengthening the economy through efficient treasury management should be suggested to fine-tune the transformation agenda, “she urged.

She noted that the theme, “Transforming of Treasury Management in Nigeria,” was apt and timely, as it would address the increasing responsibilities and dwindling revenue of the government.

Others are non-compliance with due process mechanism, inadequate ownership of the reforms by public servants, poor motivation and emerging public performance reporting system.

She emphasised that the Office of the Accountant-General of the Federation (OAGF) was central and strategic to the PFM reform.

She, therefore, advised the office of the Accountant-General to seek effective inter agency interaction to bring all government revenue and expenditure under its safety net.

“An independent revenue collection averaging 50-55 per cent of budgeted figures is no longer acceptable.”

She also tasked the participants to brainstorm and recommend strategies that would enhance revenue collection, as well as assist government take right decisions for effective transformation of the treasury system.

On his part, the Accountant-General of the Federation, Mr Jonah Otunla said 36 MDAs out of the 394 had been trained on Government Integrated Financial Management Information System (GIFMIS).

He said that the remaining 358 would be trained in batches.

On the International Public Sector Accounting Standards (IPSAS), Otunla said that sensitisation and training were ongoing in the MDAs on the new format of reporting financial transactions of government.

He charged the participants to make recommendations on issues bodering on treasury management such as improving revenue base of government and addressing gap among treasury accountants.

Otunla also challenged them to suggest institutional restructuring of the nation’s treasury for improved performance, ways to address challenges of cash planning and expenditure discipline and forum for efficient public financial management.