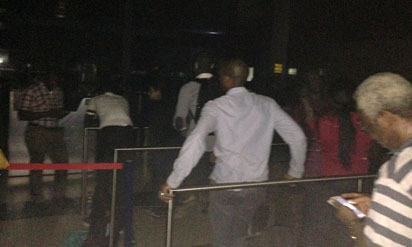 The Power situation has continued to embarrass the nation as hundreds of passengers are left at the terminals sweating as they wait for several hours for the power to be restored.

The power outage affected the ‘D’ and ‘E’ Wing of the terminal but the FAAN Spokesman, Yakubu Dati claims it was caused by the on-going construction which affected an underground armored cable fault, leading to the outage.

The situation adversely affected operations at the terminal. “The power outage at the MMIA has become an embarrassment to Nigeria and something should be done, said a passenger who does not want his name mentioned.

“How can one travel all over the world, only to get stuck at Nigeria’s airport as a result of power failure, if government must use generator, they should use it” he added.

The report from the airport reveals that the power cables have been damaged and urgently need repairs.

The power outage has continued to affect the operations of the various airlines and passengers.