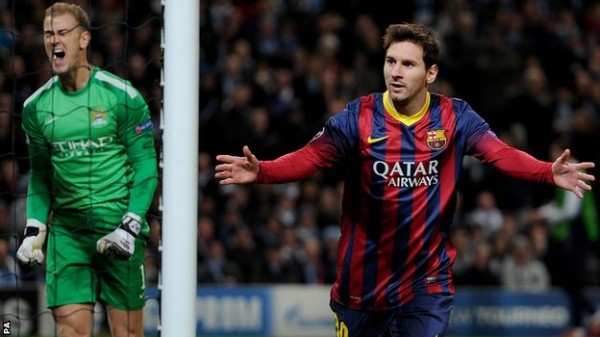 Spanish side, Barcelona defeated Premier League club, Manchester City at the Etihad Stadium in one of the UEFA Champions league Round of 16 clashes played on Tuesday night.

Manchester city’s were condemned to defeat after goals from Lionel Messi and Dani Alves gave Barcelona victory in the last 16 first leg match.

Messi scored from the spot in the 54th minute after being fouled by Martin Demichelis  who was also sent off.

Alves then exchanged passes with Neymar before dumping the ball in City’s net in the final minute.

This seems to be the end of the road for Manchester City in this season’s UCL as this  win leaves Barcelona leading by 2-0 on aggregate already before heading to the Camp Nou for the second leg of the qualifiers on March 12.

Paris Saint-Germain thrashed Bayern Leverkusen 4-0 in the other round of 16 match played on Tuesday.