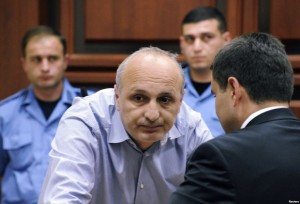 Former Georgian Prime Minister, Vano Merabishvili was on Monday sentenced to five years in jail over charges of bribery, misappropriation of public funds and abuse of office.

Merabishvili became prime minister in July 2012 and held the position for only four months because his United National Movement party lost its majority in parliament in October.

The case against him related to payments made by the state to more than 1,000 activists from his party in the run-up to parliamentary elections.

Prosecutors also accused him of acquiring a luxury villa from a company through blackmail.

Merabishvili, who served as Interior Minister for almost eight years before becoming prime minister, was one of several allies of former President Mikheil Saakashvili to be accused of graft by the government that took power after the elections.

Saakashvili’s party was pushed into the role of opposition, and businessman Bidzina Ivanishvili emerged as premier.

Ivanishvili stepped down as prime minister in November and named his longtime political associate, Irakli Gharibashvili as the new prime minister.

Merabishvili, who had faced up to 12 years in prison, had called the charges against him politically motivated.