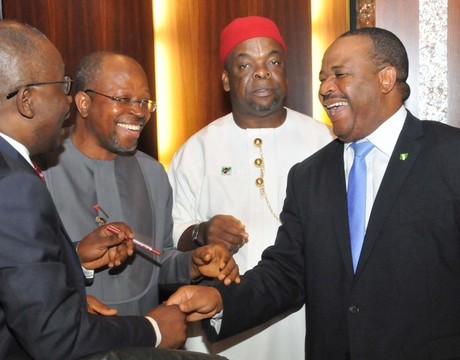 Following the sack of Stella Oduah, Nigeria’s Minister of State for Trade and Investments, Mr Samuel Ortom, will immediately take charge of the Ministry of Aviation pending the appointment of a new minister.

Minister of Information, Mr Labaran Maku, made the announcement while addressing states House Correspondent after the Federal Executive Council Meeting in Abuja.

Explaining the circumstances surrounding the sack of the four ministers in the cabinet of President Goodluck Jonathan, Maku said Mr Darius Isiaku takes over as the Minister of Niger Delta Affiars.

He said the Minister of State for the FCT, Missus Olajumoke Akinjide, will now oversee the Ministry of Police Affairs vacated by Capt. Caleb Olubolade (Rtd).

“The ministers had indicated their interest to pursue other goals in the country and so President Goodluck Jonathan asked them to go”.

The president was said to have thanked them for the job they have done in assisting the government to realise the transformation Agenda.

Maku also denied media reports that Mr Mike Oghiadome, the former Chief of staff to President Jonathan was sacked over his involvement with the NNPC missing funds.

He said the former Chief of Staff has nothing to do with the investigations going on in the NNPC.

Ministry of Agric Donates Fishing Equipment To Fishermen In Taraba