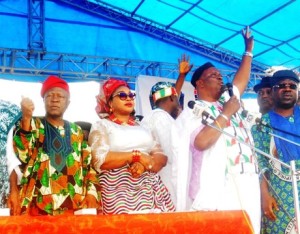 “Our march to Oshogbo Government House come August 8 remained unstoppable” Senator Iyiola Omisore formally declares his intention to contest as governor of Osun State on the platform of the People’s Democratic Party.

Governorship aspirant spoke to crowd of supporters at the freedom park, Saturday, in Osogbo, during the the flag off of his governorship ambition.

“inhuman taxes, demolition of markets without alternatives, destruction of the state education heritage ,the creation of religious crisis in an otherwise harmonious state.”

Addressing his supporters in Yoruba language, Omisore said, “ I am here offering myself for service. I am here to right the wrongs and set our state on sustainable paths”.

Also at the event, the former governor of Ekiti State, Mr Ayodele Fayose, appealed to the people of Osun State to allow Omisore to govern the state.

He said. “Omisore should be allowed to govern Osun because the crowd here has shown that the people of the state are tired of the administration of Ogbeni Rauf Aregbesola.”

Christian Association of Nigeria Back Atiku Abubakar For 2015