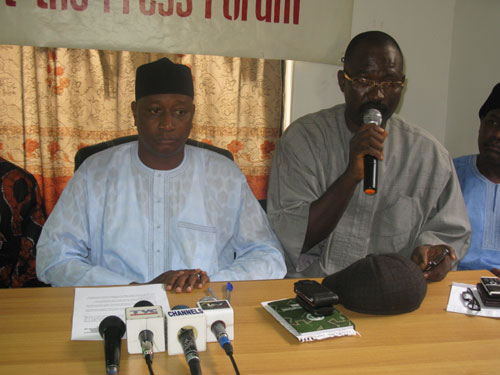 The Nigeria Union of Journalists (NUJ) on Friday advocated for more media representation in the forthcoming national conference.

The President of the union, Malam Mohammed Garba, made the call in an interview with the News Agency of Nigeria (NAN) in Abuja.

Garba said that journalists in the country had sacrificed a lot for the nation’s unity and development.

According to him, a forum such as the national conference will create another opportunity for the media to contribute to the `Nigerian project’.

He said that slots given to the media was not enough for experts in the sector to make adequate contribution.

“I feel that the slots given to the NUJ, NPAN, NGE, NAWOJ and BON is not enough, if you consider what media practitioners have contributed to the development of this nation.

“I believe that there is a lot that the media, through its representatives, can contribute to the success of the conference, so we will reach the government to request for increase in representation from the media,’’ he said.

On the nomination of its delegate to the conference, the NUJ president said the national executive had consulted extensively and had decided to nominate two of its past leaders.

Garba said that stakeholders in the media sector would make efforts to ensure that inputs from the media were adequately reflected in the outcome of the conference.

He said that the union was proposing a pre-confab forum for stakeholders in the media sector to brainstorm on common issues that would be presented at the conference.

Garba, however, hinted that welfare of journalists and making the media environment in Nigeria friendlier, would top the agenda for media delegates to the conference.

He called on Nigerians to support the conference, adding that there was no better opportunity for Nigerians to discuss the progress of the nation than the proposed conference.

Garba called on those opposed to the conference to close rank with the Federal Government and come up with meaningful suggestions on its success rather than outright condemnation.

He said that the NUJ was in support of the modalities and framework for the conference, saying that the structure of the conference as presented so far was satisfactory.

In another interview with NAN, Garba called on the National Assembly to ensure speedy passage of the 2014 appropriation.

According to him, delaying the passage of the budget beyond the first quarter of the year will not be in the interest of Nigerians.

He appealed to the legislature to ensure early passage of the budget to enable government fulfilled its obligation to Nigerians.

Footballer, Maicon Passes On At 25 In Car Accident