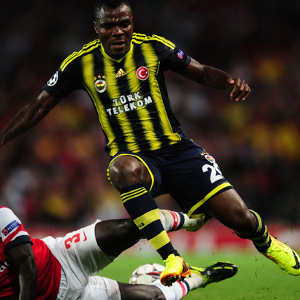 The big striker was injured during Fenerbahce’s Turkish Super Lig game against Konyaspor on January 27.

The 26-year-old was forced to leave the pitch at the Sukru Saracoglu Stadyumu in the 80th minute of the contest against Konyaspor with Mehmet Topuz taking his place.

Fenerbahce’s medic subsequently ruled that the attacker will be out of action for up to three weeks and he is now on the recovery trail.

Emenike has now begun light training as well as work in the gym and spoke to the club’s official website to discuss the state of his recovery.

“Today (Thursday), I started to run. I feel very good to have begun the process of returning to the team. That makes very happy,” he told www.fenerbahce.org.

Emenike has scored eight league goals in 17 league appearances for Fenerbahçe this season.