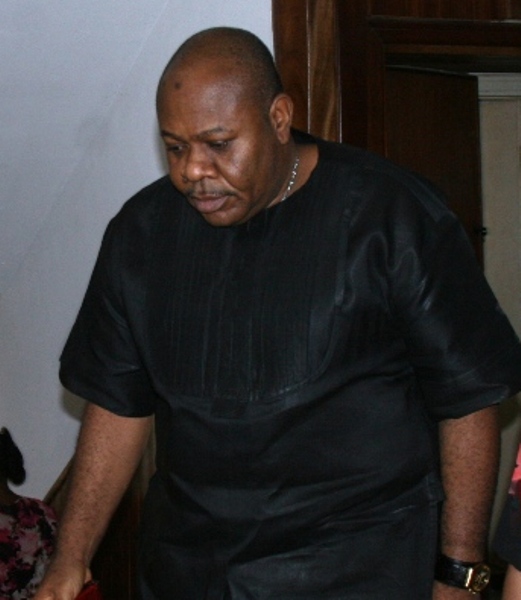 Fred Ajudua has been remanded in Kirikiri Prison for allegedly defrauding former Chief of Army Staff, Lt.-Gen. Ishaya Bamaiyi (retd.), of about $8.395m (about N1.3 billion).

Justice Justice Oluwatoyin Ipaye ordered on Wednesday that he should be remanded in prisons custody following a fresh 13-count charge of fraud brought against him by the Economic and Financial Crimes Commission, EFCC.

The EFCC in the fresh charges dated 14 October, 2013, alleged that Ajudua, along with others still at large, defrauded Gen. Bamaiyi of $8.387m between November 2004 and June 2005 while in prison.

Ajudua is the only defendant in the fresh charges as others who allegedly committed the offences along with him are said to be at large.

Other suspects said to be on the run, are Alumile Adedeji (a.k.a Ade Bendel), Mr. Kenneth and Princess Hamabon William.

Ajudua, along with other suspects, were said to have defrauded Bamaiyi at the Kirikiri Maximum Prisons, where he and the other fraud suspects were on remand for various crimes.

EFCC claimed that the suspects had fraudulently collected the money from Bamaiyi instalmentally, falsely claiming that the payments represented the professional fees charged by

Chief Afe Babalola (SAN) to handle Bamaiyi’s case in court and to facilitate his release from prison.

The anti-graft agency also alleged that Ajudua and others fraudulently claimed that $1m out of the total money collected from Bamaiyi was for financial assistance for the treatment of Justice Olubunmi Oyewole’s father. Justice Oyewole was then presiding over Bamaiyi’s case in court.

The suspects were said to have told Bamaiyi that Oyewole’s father was admitted at Saint Nicholas Hospital in Lagos and the $1m was meant to assist the judge in treating his father.

When the charges were read to him today, he pleaded not guilty to the allegations.

His bail application was however not heard as the presiding judge adjourned the matter till 20 February, 2014.

Ajudua is also standing trial in another court for allegedly defrauding two Dutch businessmen, Remy Cina and Pierre Vijgen, of $1.69m (about N270m). The matter has been on since 2003.