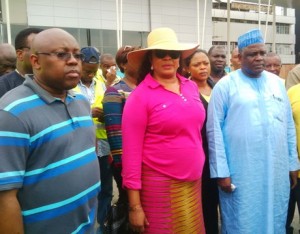 Aviation Minister, Princess Stella Adaeze Oduah has declared that there will be no abandoned project in the sector under her watch as Minister. Oduah was speaking at the Yola airport, weekend at the commencement of a two-day inspection tour of the remodelling projects in airports across the country.
Oduah, who decried the abandoned project syndrome in the Nigerian polity in the past, said President Jonathan and the leadership in the aviation sector is very committed to the full and timely completion of projects started in late 2011 under the Airport Remodelling Project initiative.
‘’When we came on board in 2011 and drew up our Master Plan and implementation Roadmap which had as its core components, the Airport Remodelling Project, we were charged by Mr President to ensure that we complete every project we embark on. We assured Mr President that we will see every project to its logical conclusion and we are committed to that promise.
‘’We are fortunate to have his full support and the support of the Federal Executive Council (FEC). The result of that level of support is what you are seeing today. Not only have we completed, commissioned and put to use a lot of the remodelled airports, work on the remaining ones is at 95 per cent completion. So under my watch, no project we have commenced will be abandoned’’, the Minister assured.
She said the Yola airport is very important and critical to the successful implementation of the transformation programme in the aviation sector as one of the designated Perishable Cargo centres, and disclosed that the Cargo terminal would be completed in the second quarter of this year.
The Minster expressed happiness with the quality of work at the remodelled Yola airport, saying that when fully operational, the airport and its cargo facility will not only create thousands of jobs for the people of the state, but more importantly, empower the rural farmers whose fresh produce will have access to both local and international markets.
At the Sultan Abubakar 111 International Airport, Sokoto, the Minister expressed satisfaction with the quality of work on the remodelled airport, disclosing that government was constructing the biggest Pilgrim Terminal in the country at the airport. The terminal, whose construction has already commenced, has a capacity of about 5,000.
At assumption of duty as Minister in 2011, Oduah assembled a team of Experts to produce the Aviation Sector Master Plan and implementation Road Map. The airport remodelling project initiative is a core aspect of the Master Plan. 11 airports were taken in the First Phase of the remodelling programme. The second Phase took care of the remaining 11. Work on the 11 airports in the Second Phase is at 95 per cent completion.
Related Topics:NigeriaStella OduahAviationNigerian airports
Up Next