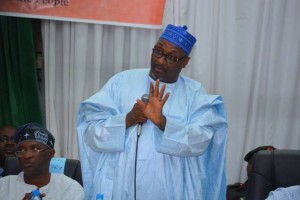 In continuation of his nationwide consultation with elders of the party the National Chairman of the Peoples Democratic Party Alhaji Adamu Mu’azu on Friday held a closed-door meeting with former Military President, General Ibrahim Babangida.

The Chairman led a 15-man team, to the Minna residence of the former Military President at about 12.05pm and went into a closed-door meeting, which lasted till 1.05pm.

Babangida who declined to speak with journalists on the meeting said “I am not going to say a word. I am not talking,”.

Muazu said he was in Minna as part of his reconcilatory move and in continuation of his meeting with some elders of the party since he emerged as the chairman of the ruling party.

Mu’azu, while declining to give details of the meeting, said, “What we discussed is not meant for public consumption. All I can say is that we had a fruitful discussion”.

But the party chieftains were excused from the meeting to enable the two leaders to have a private session.