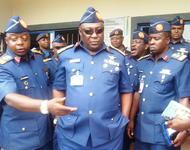 The Senate on Thursday confirmed four Service Chiefs nominated by President Goodluck Jonathan.
This followed the consideration of the report of the Senate Joint Committee on Defence/Army, Navy and Air Force that screened the nominees.
The committee gave the nominees clean bill of health, prompting smooth confirmation by the upper chamber.
The Chairman of the Committee, Senator George Sekibo, while presenting the report said, “Having assessed the four nominees thoroughly and found them fit for the leadership of their respective services, the Joint Committee wishes to recommend that the Senate do confirm and approve their appointment and decoration by the President of the Federal Republic of Nigeria as Service Chiefs.”
Those confirmed are – the Chief of Defence Staff, Air Marshall Alex Badeh; Chief of Army Staff, Major General Kenneth Minimah; Chief of Naval Staff, Rear Admiral Usman Jibrin and Chief of Air Staff, Air Vice Marshall Adesola Amosu.
Deputy Senate President, Ike Ekweremadu, urged the service chiefs to bring their wealth of experience to bear in the discharge of their functions.
He urged them to live up to the expectation of Nigerians.