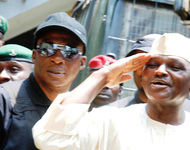 Al- Mustapha , who is the President, Unity and Development Initiative (APUDI), an NGO, made the plea when he led members of the management team of the organisation on a courtesy call to the Bauchi State Governor, Malam Isa Yuguda ,in Bauchi.

He said that the organisation was creating new opportunities that would promote the well being of the younger ones.

“We will channel their request through some international donor agencies whose commitments and mission are to promote education, employment and the well being of the younger generation.

“We want to extend this gesture to the youth of this state by calling on their attention to look into some of these opportunities we are trying to create.

“It is necessary for the Initiative to come, introduce itself, its programmes and seek the cooperation and the understanding of the leadership of this state.

“We hope that the state government will partner with us in the various programmes outlined and designed to help the younger ones in terms of creating job opportunities and help them to be self reliant.“

Al-Mustapha also said he was in the state to show appreciation to the elders in the state for their prayers during his 15 years travail.

Responding, Yuguda expressed the readiness of his state to partner with the organisation on anything that would foster national unity and create jobs opportunity for the teeming youths of the state.

Yuguda, who was represented by his Chief of Staff, Alhaji Musa Gumli , appealed to Al-Mustapha to take all that had happened to him as an act of God and forgive all those that erred.

He blamed Al-Mustapha’s misfortune on political manipulation of the judicial system to the detriment of the cause of justice and fairness.