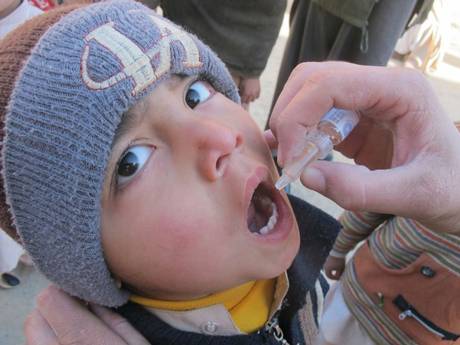 The billionaire philanthropist Bill Gates has warned that violence in Pakistan and Nigeria is threatening to derail his plan to eradicate polio in the world by 2018. He spoke as a number of polio workers and their protection teams were attacked and killed in Pakistan.
Mr Gates, who has poured billions of dollars into tackling the crippling disease, said that while polio remained endemic in just three countries it was proving difficult to wipe out.

“Nigeria and Pakistan are going to be tough. The Pakistan violence is evil,” Mr Gates told the AFP news agency. “The truth is the vaccine is to help kids. And spreading rumours and attacking the workers on this… those people don’t have justice and truth on their side.”

India, which once suffered the most from polio, recently celebrated being three years without a confirmed case. But the disease remains endemic in Afghanistan, Nigeria and Pakistan and there have been new outbreaks in Somalia and Syria. Of the three countries where it is endemic, only Pakistan saw an increase in cases.

Last November, the World Health Origination (WHO) confirmed that the strain of polio that had broken out in Syria had originated in Pakistan and last week the organisation identified the north-west Pakistani city of Peshawar as the largest reservoir of the disease.

Polio vaccination workers in Pakistan, most of them women, have been repeatedly targeted in Pakistan, apparently by the Taliban. The militants have prevented polio workers reaching large swathes of the remote tribal areas that border Afghanistan. Hundreds of thousands of youngsters have missed out on getting the vaccine.
On Wednesday, six police officers on their way to guard a polio team were killed by a bomb rigged to a bicycle exploded next to them. A young boy was also killed and another 11 people were injured in the explosion in Charsadda, close to Peshawar.

On Tuesday, three polio workers were shot dead in the southern city of Karachi, resulting in the suspension of the vaccination programme across the entire province of Sindh.

Dr Altaf Bosan, the head of the polio monitoring team that reports to Prime Minister Nawaz Sharif, told The Independent that another polio worker had been killed on Tuesday, though he said he believed it was not related to the person’s work.

“Ninety per cent of the cases of polio are in security-vulnerable areas,” he said, saying that the government was trying to provide security. “It’s the responsibility of the state to protect these people. The government is committed to getting ride of polio.”

Some remote communities in Pakistan have long been suspicious of visiting doctors and vaccination teams. Many believe conspiracy theories that the vaccinators are part of a Western plot to sterilise Muslims.

Yet the situation has got appreciably more difficult following the 2011 US operation to locate and kill Osama Bin Laden. In the aftermath of the operation it emerged the CIA had recruited a Pakistani doctor to organise a fake vaccination drive to try and obtain a DNA sample from the children living inside the al-Qa’ida leader’s Abbottabad compound.

The doctor, Shakil Afridi, was later charged with treason and sentenced to jail for 33 years. A court has ordered a retrial and the West has been pushing Pakistan to release the doctor. The US last week again threatened to without aid over the issue.
Last November the Global Polio Eradication Initiative said Nigeria had 51 of the 328 cases of the disease worldwide in 2013, compared to 121 out of 223 in 2012.

But the numbers increasing in Pakistan. Last year a total of 91 cases were reported, compared with 58 in 2012. The WHO said 90 per cent of Pakistan’s cases were genetically linked to Peshawar. During the last six months, every sample taken from Peshawar’s sewage system tested positive for a highly contagious wild polio virus strain, the WHO said.

In a statement, the WHO said that a major polio outbreak in the tribal areas that left 65 children paralysed had been sustained by Peshawar. “As much of the population of the area moves through Peshawar, the city acts as an amplifier of the poliovirus,” it said.

Mr Gates’s Bill and Melinda Gates Foundation made eradicating polio a priority for the next six years. Yet the Microsoft founder said his target may have to be pushed back.

“Everyday we’re talking about what’s going well, what’s not, how we track the teams, where new approaches can help out so we’ve intensified the effort,” he said.

* In a separate incident on Wednesday in Pakistan, gunmen opened fire on Pakistani police escorting a Spanish cyclist, killing six officers and injuring the cyclist. The incident happened in Baluchistan.

Article originally published on THE INDEPENDENT

Meeting Between Obama And Pope Francis Scheduled For March