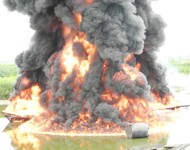 The Joint Military Task Force (JTF) in the Niger Delta says it has impounded 20 barges and five boats laden with 1,348 barrel of crude oil suspected to have been stolen in Bayelsa.

The JTF said this in a statement signed by the the Media Coordinator, Col. Onyema Nwachukwu, in Yenagoa on Monday.

It said that the barges and boats were arrested between Jan. 9 and Jan. 19 by the anti-illegal oil bunkering patrol squads.

Nwachukwu said that the boats were intercepted in Bodo West River and Azagbene creek in Ekeremor Local Government Area of the state.

He said that the illegal refineries were destroyed by the patrol team, adding that 18 surface tanks, 11 drums, four plastic tanks, two pumping machines and hoses were also recovered in the clamp down.

Nwachukwu also disclosed that troops of 222 Battalion of Sector 1 of the task force , deployed in Kokori flow station in Delta, had arrested three suspects for allegedly syphoning crude oil from a flow station.

He said that the suspects had already loaded the stolen crude in 20 drums into a truck before they were intercepted.

“The suspects are currently in the custody of 222 Battalion assisting in preliminary investigations before they will be transferred to a relevant agency for prosecution,” he said.

“The cordon and search operation which was successfully executed has so far yielded positive results as our troops have recovered several tools used for illegal bunkering.

“Four suspects arrested in the cordon and search operation are currently being processed for handing over to appropriate prosecuting agency.”

Related Topics:BayelsaOil theft
Up Next