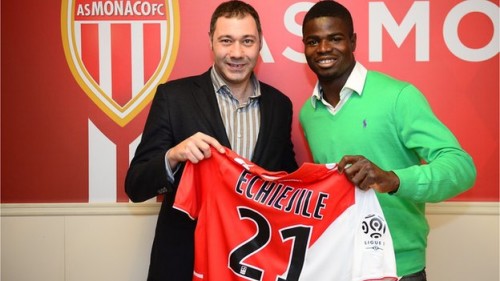 Nigerian defender, Elderson Echiejile has put pen to paper for French Ligue 1 side, Monaco on a four-and-a-half year deal. The deal sees the 25 years old Nigerian return to France where he had previously spent three years playing for Rennes before joining Portuguese club, Sporting Braga.

Monaco FC is popular with Africans because legends like George Weah of Liberia and Victor Ikpeba of Nigeria had previously plied their trade for the French outfit with the latter even being crowned as the Prince Of Monaco.

Other Nigerians who have also represented the Ligue 1 side are: Lukman Haruna, Sani Kaita and Rabiu Afolabi

“I am very happy and proud – Monaco is one of the best clubs in Europe,”

“They have a great reputation in Africa since George Weah played here.”

“I’ll give the best of myself to succeed them as best as possible,” Echiejile told Monaco’s website.