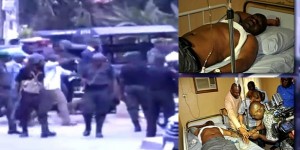 The Rivers State Police Command on Sunday denied allegations that its personnel shot and wounded a member of the National Assembly, Sen. Magnus Abe.

Ahmad Muhammad, a Deputy Superintendent of Police, (DSP), said the police did not dispense any bullet while dispersing a rally by Save Rivers Movement on Sunday.

He said the group was at the state College of Arts and Science for the rally when they were dispersed because they did not obtain a police permit.

“I can confirm to you that Sen. Magnus Abe was not shot. The police did not expend any single bullet while dispersing the crowd.