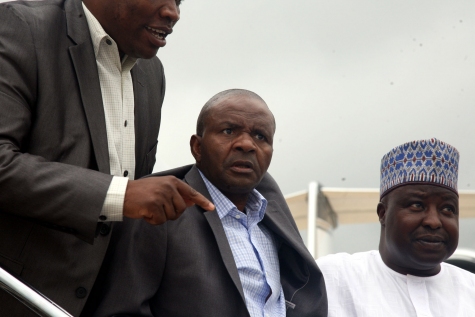 Recuperating Taraba state Governor, Mr Danbaba Suntai flew into the Nation’s capital, Abuja yesterday. He would be hoping to meet President Goodluck Jonathan and one-time Defence Minister, Theophilus Danjuma to wet the ground for his return to office

The Governor was flown into Abuja aboard a private jet which allegedly belongs to Danjuma. Rtd Gen Theophilus Danjuma is reported to be in support of the Governor’s return to office after recovering an air crash which left him incapacitated for about a year.

Reports have it that Suntai would be received by Danjuma, who would then present him to President Goodluck Jonathan so as to discuss his resumption of work that has been surrounded by controversy.

President Jonathan is currently on a trip overseas and will return at the weekend.

The Acting Governor of the State, Alhaji Garba Umar is said to be in Abuja also with the Speaker of the House of Assembly to meet with strategists of the President in a view to stalling Suntai’s resumption.

Majority of the Taraba House of Assembly believe Suntai is unfit  to resume work.

Obasanjo Writes Letter To Tukur, Notifies PDP Of His Withdrawal From It’s Activities