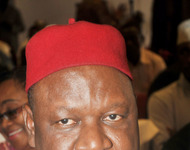 As part of efforts to reduce cost of governance, the Federal Government has directed that training of personnel of ministries, departments and agencies must be held in the country from 2014.

This is contained in a document analysing the 2014 budget on major focus of government to ensure good governance released by the Ministry of Finance.

“From 2014, all training for personnel of MDAs and Parastatals must now take place in Nigeria.

“Foreign training programmes will only be approved in exceptional cases and will be based on guidelines to be developed by the Head of Service and the Director –General of Budget Office.’’

It said that foreign travels by government personnel would further be curtailed, adding that the directive would apply to all ministries, departments and agencies of the Federal Government.

On pension system, it said that a Pension Transition Arrangement Department under a new director general had been setup in 2013.

According to the document, in 2014, this department will now ensure pensioners still under the old scheme receive their pensions and gratuities.

It said that effort to ensure effective payment system would be top priority of government.

This, it said, was geared towards improving efficiency and transparency in the public finance.

It said that with the introduction of this payment system, the Federal Government had saved N126 billion.

Migration Palaver: Woman Arrested While Trying To Enter USA In A Suitcase