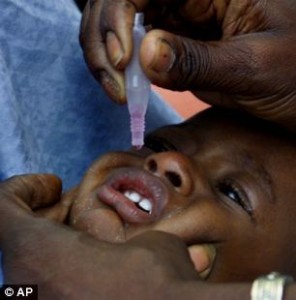 A total of 1.2 million children were immunised against integrated measles in Kaduna State in the year 2013, a State Primary Health Care Agency official said on Friday.

Alhaji Hamza Ikara, the Health Education Officer of the agency, told the News Agency of Nigeria (NAN) in Kaduna that the immunisation programme recorded over 85 per cent success.

He attributed the success of the immunisation exercise to the combined efforts of key stakeholders in the health sector.

Ikara said the integrated measles campaign, conducted in October, had targeted 1.3 million children but 1.2 million were immunised due to shortage of vaccines.

He however said the measles vaccination was still on-going in all the 510 health facilities in the state, for children within the ages of nine months to five years, adding that more vaccines had been provided.

According to him, 5.2 million people in the state targeted have been vaccinated against cerebro spinal meningitis out of the 5.8 million targeted.

“The state would have achieved 100 per cent target if not for the non-compliance and resistance by some beneficiaries,” he said.

Ikara noted that the state had recorded gains in the fight against polio, saying no single case of polio virus infection was discovered in the past 12 months.

He appreciated some international partners such as WHO, UNICEF, PATH, NPHCDA AND N-STOP for their commitment and contributions to the achievement recorded so far.

“We want to make sure we eradicate all the killer diseases in the state and country at large and we believe more success will be recorded this year if all beneficiaries will comply,” he said.

The official said preparations for next round of polio vaccination has commenced and will take place from Jan. 26-29.

Ikara commended the media for its “excellent contributions to the successes recorded” and called for continued collaboration with the agency.