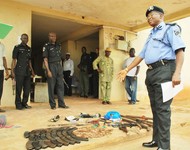 The Police Command in Kebbi on Friday said it recovered some arms buried by unknown persons in Rafin Kukah village in Yauri Local Government Area of the state.

The Commissioner of Police in the state, Mr Sylvester Umeh, told newsmen in Birnin Kebbi that the arms were recovered on New Year eve.

“A Good Samaritan reported it to the DPO of Yauri Police Division, Kabiru Abdul, who mobilised to the scene and recovered the arms,” he said.

He called on the public to provide information to the police to help them in the detection and prevention of criminal activities, adding that security was a collective responsibility.

“The command will ensure confidentiality of our informants,” he said.

He said investigations into the source and identity of the owner of the arms was ongoing.

“We at this command will not relent in our responsibilities to ensure that the state is crime-free.’’

Fashola Pleads With Lagos Doctors Not To Join Nationwide Strike